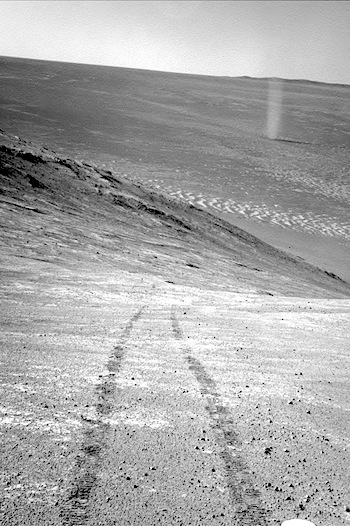 May 10, 2016: Opportunity Sleuths New Site for Smectites: After capturing a rare image of a dust devil whirling through the interior of Endeavour Crater at the end of March, Opportunity and the Mars Exploration Rovers (MER) team pressed on through the Martian winter and spent April sleuthing for clay minerals at the mission’s new site on the southern wall of Marathon Valley.

The robot field geologist dedicated the first half of the month to a walkabout around the site, which is located on a gentle slope near the head of the valley where it cuts into the western rim of Endeavour, a 22-meter (13.7-mile) diameter crater. From the images Opportunity sent home, the MER scientists chose an outcrop in what appears in orbital data to be a field of ancient clay mineral residue, and the rover spent the rest of the month examining a target there up close.

“We’re on the very southwestern part of the site, in the middle of a science campaign,” said Ray Arvidson, MER deputy principal investigator, of Washington University St. Louis, at month’s end. [More at link]