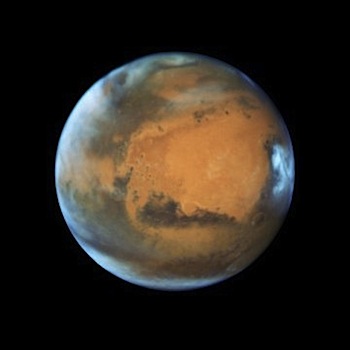 Bright, frosty polar caps, and clouds above a vivid, rust-colored landscape reveal Mars as a dynamic seasonal planet in this NASA Hubble Space Telescope view taken on May 12, 2016, when Mars was 50 million miles from Earth. The Hubble image reveals details as small as 20 to 30 miles across.

The large, dark region at far right is Syrtis Major Planitia, one of the first features identified on the surface of the planet by seventeenth century observers. Christiaan Huygens used this feature to measure the rotation rate of Mars. (A Martian day is about 24 hours and 37 minutes.) Today we know that Syrtis Major is an ancient, inactive shield volcano. Late-afternoon clouds surround its summit in this view. [More at link]

This entry was posted in Reports and tagged atmosphere, HST, Hubble Space Telescope. Bookmark the permalink.