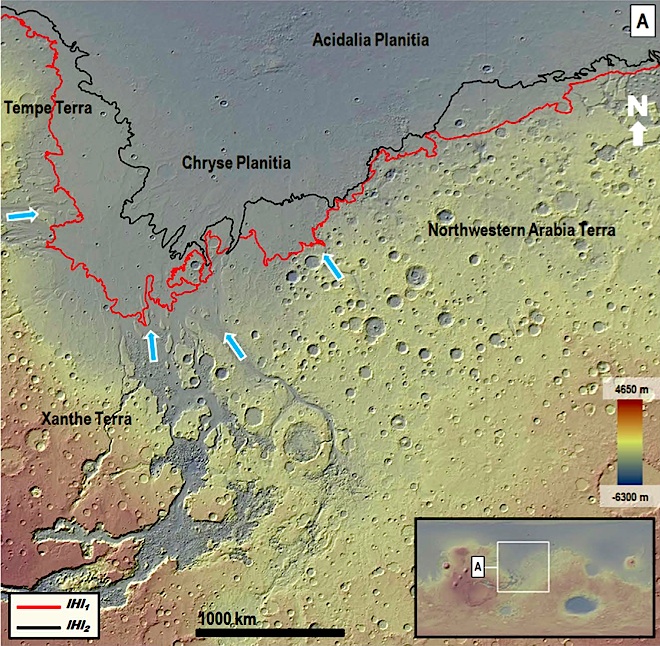 The geologic shape of what were once shorelines through Mars’ northern plains convinces scientists that two large meteorites – hitting the planet millions of years apart – triggered a pair of mega-tsunamis. These gigantic waves forever scarred the Martian landscape and yielded evidence of cold, salty oceans conducive to sustaining life.

“About 3.4 billion years ago, a big meteorite impact triggered the first tsunami wave. This wave was composed of liquid water. It formed widespread backwash channels to carry the water back to the ocean,” said Alberto Fairén, Cornell visiting scientist in astronomy and principal investigator at the Center of Astrobiology, Madrid.

Fairén, who with lead author Alexis Rodriguez of the Planetary Science Institute and 12 others, published their work in Scientific Reports (May 19), a publication of the journal Nature. [The paper is open-access and freely available without logging in.]

The scientists found evidence for another big meteorite impact, which triggered a second tsunami wave. In the millions of years between the two meteorite impacts and their associated mega-tsunamis, Mars went through frigid climate change, where water turned to ice, Fairén said: “The ocean level receded from its original shoreline to form a secondary shoreline, because the climate had become significantly colder.” [More at links above, and here]