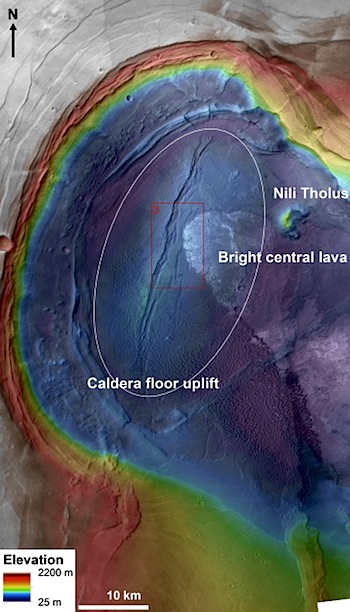 Planetary Geomorphology Image of the Month, May 30, 2016: Peter Fawdon (University of London). Volcanism is an important process that can be observed on the surface of many planetary bodies. Not all magma bodies erupt extrusively onto the planet’s surface, many simply stall within the crust, cooling slowly over millions of years to form igneous intrusions. On Earth erosion and uplift expose the frozen core of ancient volcanoes relatively frequently, however, it is considerably more difficult to investigate this intrusive magmatism on other planets.

In Nili Patera, a volcanic caldera on Mars, it is possible to see the influence of intrusive magmatism on the surface geomorphology. Nili Patera is one of two calderas in the centre of Syrtis Major Planum (8.4˚N 69.5˚W). This volcanic plain comprised of long basaltic lava flows formed in the Hesperian (~3.0 – 3.7 Ga) and predates the formation of the central calderas which themselves contain several phases of volcanic activity. Importantly this activity includes the eruption of a lava flow with a high-silica composition [Christensen et al., 2005] and the development of a resurgent dome in the western caldera floor [Fawdon et al., 2015]. [More at link]