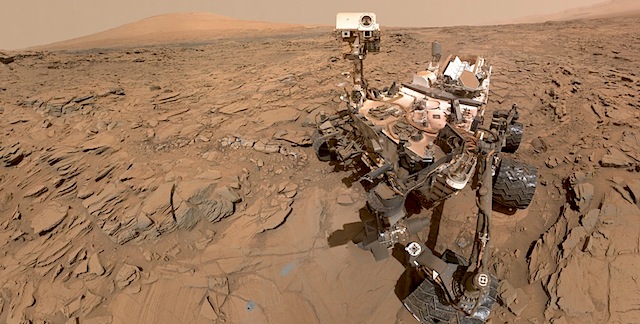 NASA’s Curiosity Mars rover has analyzed its 12th drilled sample of Mars. This sample came from mudstone bedrock, which the rover resumed climbing in late May after six months studying other features. (…)

While on the “Naukluft Plateau,” the rover examined its 10th and 11th drill targets to repeat an experiment comparing material within and away from pale zones around fractures. From there, Curiosity also took the latest in a series of self-portraits.

“Now that we’ve skirted our way around the dunes and crossed the plateau, we’ve turned south to climb the mountain head-on,” said Curiosity Project Scientist Ashwin Vasavada, of NASA’s Jet Propulsion Laboratory, Pasadena, California. “Since landing, we’ve been aiming for this gap in the terrain and this left turn. It’s a great moment for the mission.” [More at link]