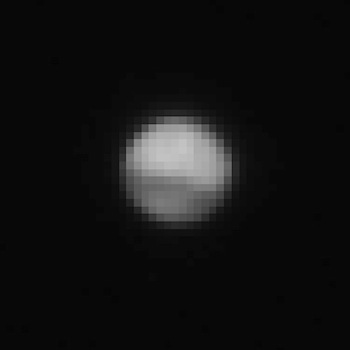 The Mars Camera CaSSIS on the ExoMars Trace Gas Orbiter captured its first images of the Red Planet this week. The pictures are a part of the mission’s preparations for arriving at its destination in October.

CaSSIS (Colour and Stereo Surface Imaging System) has been developed by a team led by the University of Bern. It was launched with the European Space Agency’s ExoMars Trace Gas Orbiter (TGO) in March and has already travelled just under half of its nearly 500 million km journey. (…)

The orbiter and Mars were 41 million kilometres apart on 13 June when the new image was taken. Although it does not compare to the high-resolution scenes that will be returned once the spacecraft is finally at Mars, it is an important milestone for the camera team. [More at link and here]