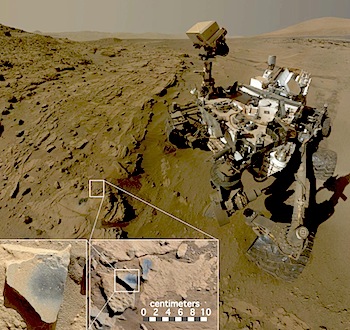 Chemicals found in Martian rocks by NASA’s Curiosity Mars rover suggest the Red Planet once had more oxygen in its atmosphere than it does now.

Researchers found high levels of manganese oxides by using a laser-firing instrument on the rover. This hint of more oxygen in Mars’ early atmosphere adds to other Curiosity findings — such as evidence about ancient lakes — revealing how Earth-like our neighboring planet once was. [The research appears in Geophysical Research Letters.]

This research also adds important context to other clues about atmospheric oxygen in Mars’ past. The manganese oxides were found in mineral veins within a geological setting the Curiosity mission has placed in a timeline of ancient environmental conditions. From that context, the higher oxygen level can be linked to a time when groundwater was present in the rover’s Gale Crater study area.

“The only ways on Earth that we know how to make these manganese materials involve atmospheric oxygen or microbes,” said Nina Lanza, a planetary scientist at Los Alamos National Laboratory in New Mexico. “Now we’re seeing manganese oxides on Mars, and we’re wondering how the heck these could have formed?” [More at link and here]