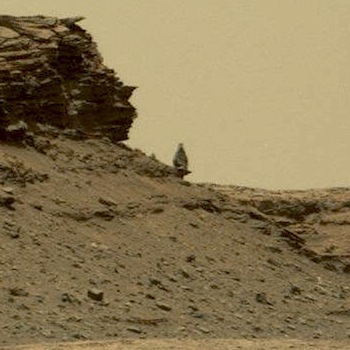 Sol 1389, July 6, 2016, update from USGS scientist Ken Herkenhoff: The activities planned for Sols 1387 and 1388 completed successfully, and lots of good data were returned including a stunning Right Mastcam panorama of the “Murray Buttes” toward the southwest.  One of the images in this panorama shows a boulder that appears to be precariously balanced.  No, we don’t plan to drive right up next to it, but we’ll probably get closer looks as the rover proceeds toward Mount Sharp.

Early on Sol 1389, the rover entered “safe mode”, apparently due to a software problem that is still not fully understood.  So the 3-sol plan did not execute but the rover and all subsystems are healthy.  Science planning has been suspended while critical engineering data are returned to Earth and studied by software experts at JPL. [More at link]