Do salts draw water from atmosphere for RSLs?

Puzzles persist about possible water at seasonally dark streaks on Martian slopes, according to a new study of thousands of such features in the Red Planet’s largest canyon system. 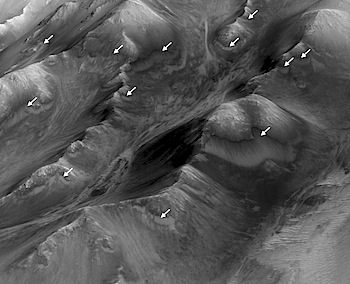 The study published today [in the Journal of Gephysical Research] investigated thousands of these warm-season features in the Valles Marineris region near Mars’ equator. Some of the sites displaying the seasonal flows are canyon ridges and isolated peaks, ground shapes that make it hard to explain the streaks as resulting from underground water directly reaching the surface. It is highly unlikely that shallow ground ice would be present as a source for seasonal melting, given the warm temperatures in the equatorial canyons.

Water pulled from the atmosphere by salts, or mechanisms with no flowing water involved, remain possible explanations for the features at these sites. [More at links]