Methane in a flash

Martian methane is a hot topic because of its potential origin in biological, as well as geological processes. Observations (Earth-based and from Mars orbit) have found only a small quantity of the greenhouse gas in the atmosphere of Mars — some 10 to 50 parts per billion by volume — and it may vary from place to place on the planet in the form of “plumes.” 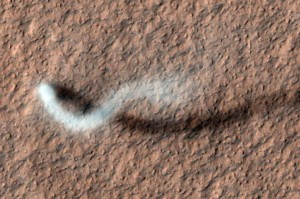 SNAP, CRACKLE, ZAP! Electrical discharges occuring within sand and dust storms and dust devils can break down water and CO2 molecules, and the byproducts may recombine to prpduce methane. (NASA/JPL-Caltech/University of Arizona image of a dust devil in Amazonis, captured by the HiRISE camera on the Mars Reconnaissance Orbiter)

Stoking the interest is the fact that because methane cannot survive more than a few hundred years under Martian conditions, its presence today implies continuing replenishment through some method.

A new report on laboratory experiments suggests that in addition to potential biological and geological sources for methane, electrical discharges can also produce methane. The report appears in Geophysical Research Letters (September 8, 2012).

“We propose a new production mechanism for methane based on the effect of electrical discharges over iced surfaces,” say the researchers, led by Arturo Robledo-Martinez (Universidad Autónoma Metropolitana, Azcapotzalco, Mexico). They reached their conclusions through laboratory experiments.

As the team notes, “The discharges, caused by electrification of dust devils and sand storms, ionize gaseous CO2 and water molecules and their byproducts recombine to produce methane.”

Their experimental work also revealed that the microscopic structure of the surface helped. “The electrical field produced by a dust devil can not only overcome the weak dielectric strength of the Martian atmosphere, but also penetrate into cracks on the soil and so reach the ice lying at the bottom, with added strength, due to the topography of the terrain.”

The scientists add that, “The present mechanism may be acting in parallel with other proposed sources but its main advantage is that it can generate methane very quickly and thus explain the generation of plumes.”