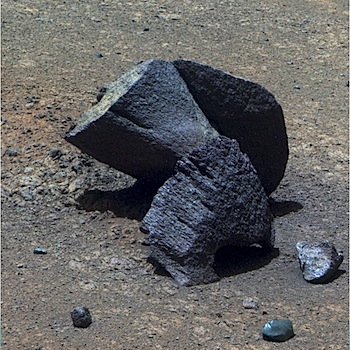 August 3, 2016: Opportunity Nears End of Marathon Valley Tour, Team Celebrates 40th Anniversary of Viking: …Opportunity worked some of the last of her science assignments in Marathon Valley and the Mars Exploration Rovers (MER) team celebrated its 10th mission extension and respectfully paid tribute to Viking, one of the giants in the history of Mars exploration and the first American mission to safely land robots on the rusty red surface.

“We’ve been extended for two more years and we’re very excited,” said John Callas, MER project manager, at the Jet Propulsion Laboratory (JPL), home to all NASA’s Mars rovers. “We’re pleased with the results and recommendations and that NASA has acknowledged those recommendations.”

The two-year mission extension assures that the first overland expedition of the Red Planet and Opportunity will rove on, funded through 2018, barring any unforeseen budget crises. The plan forward will take the rover places no Mars surface mission has ever gone and test the mettle of the golf cart size emissary in ways that she has never before been tested.

“We’re very pleased with the way the review came out,” said Steve Squyres, MER principal investigator, of Cornell University. “The Senior Review Board clearly appreciated the story we had to tell, especially our story about what we’re going to be doing during the two years ahead of us.” [More at link]