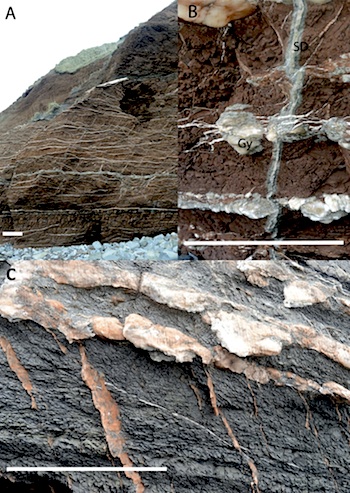 Mineral veins found in Mars’s Gale Crater were formed by the evaporation of ancient Martian lakes, a new study has shown. [The study was published in the journal Meteoritics & Planetary Science.]

The research, by Mars Science Laboratory Participating Scientists at The Open University and the University of Leicester, used the Mars Curiosity rover to explore Yellowknife Bay in Gale Crater on Mars, examining the mineralogy of veins that were paths for groundwater in mudstones.

The study suggests that the veins formed as the sediments from the ancient lake were buried, heated to about 50 degrees Celsius and corroded.

Professor John Bridges from the University of Leicester Department of Physics and Astronomy said: “The taste of this Martian groundwater would be rather unpleasant, with about 20 times the content of sulphate and sodium than bottled mineral water for instance!

“However as Dr Schwenzer from The Open University concludes, some microbes on Earth do like sulphur and iron rich fluids, because they can use those two elements to gain energy. Therefore, for the question of habitability at Gale Crater the taste of the water is very exciting news.” [More at links]

This entry was posted in Reports and tagged lakes, mineral veins, paleolakes. Bookmark the permalink.