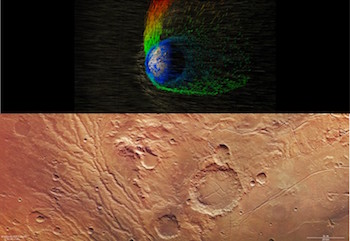 Why is the surface of Mars no longer habitable?

Sounds like a straightforward question, right? However, those nine words comprise one of the most vexing questions in planetary science. There is now overwhelming evidence that Mars was once a place where liquid water flowed on the surface and, thus, life as we know it could have thrived, at least episodically. Orbiters have identified branching networks of valleys that most likely were carved by rainwater or snowmelt. Rovers have driven through ancient streambeds and found minerals that can only be formed over many years underwater. However, such stable surface water requires an atmospheric surface pressure much higher than today’s ~7 millibars (<1% of Earth’s pressure) to prevent evaporation and cause greenhouse warming.

Where did this ancient atmosphere go? … [More at link]

This entry was posted in Reports and tagged atmosphere, Mars Atmosphere and Volatile EvolutioN, MAVEN, NASA, University of Colorado. Bookmark the permalink.