Curiosity: Farewell to the Murray Buttes 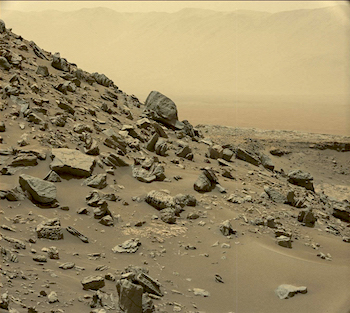 Curiosity took the images with its Mast Camera (Mastcam) on Sept. 8. The rover team plans to assemble several large, color mosaics from the multitude of images taken at this location in the near future.

“Curiosity’s science team has been just thrilled to go on this road trip through a bit of the American desert Southwest on Mars,” said Curiosity Project Scientist Ashwin Vasavada, of NASA’s Jet Propulsion Laboratory, Pasadena, California.

The Martian buttes and mesas rising above the surface are eroded remnants of ancient sandstone that originated when winds deposited sand after lower Mount Sharp had formed. [More at link]