Taking a mixed-reality trip to Mars 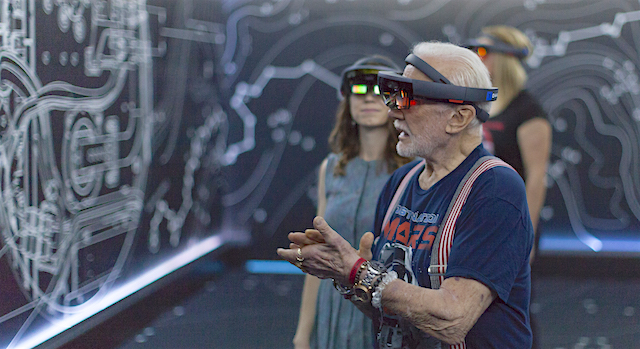 It’ll be years before the first astronauts leave the launch pad on Earth to journey to Mars. But starting Sept. 19, visitors to the Kennedy Space Center visitor complex in Florida will get a taste of what those astronauts will see when they touch down on the Red Planet.

Apollo 11 astronaut Buzz Aldrin joined key representatives to introduce the limited-time experience, which runs through January 1, 2017. He said that the moon landing cultivated what became known as “the Apollo effect” — an enthusiasm for space research that inspired a generation to study science and engineering.

“Technology like HoloLens leads us once again toward exploration,” Aldrin said. “It’s my hope that experiences like “Destination: Mars” will continue to inspire us to explore.”

Aldrin and JPL Curiosity rover driver Erisa Hines both appear in “Destination: Mars,” where they guide users across the landscape and offer a tantalizing glimpse of a future Martian colony. The technology that accomplishes this is called “mixed reality,” where virtual elements are merged with the user’s actual environment, creating a world in which real and virtual objects can interact. [More at link]