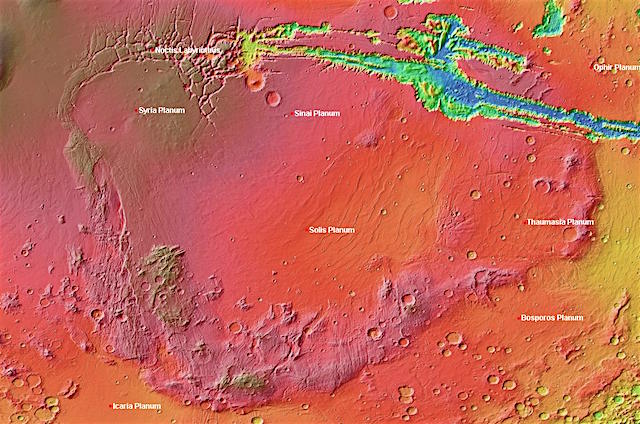 They analyzed the geography and mineralogy of this area they termed Greater Thaumasia, which is about the size of North America. They also studied the chemistry of this area based on Gamma Ray Spectrometer data collected by the Mars Odyssey Orbiter, which was launched in 2001.

What they found was the mountain ridge that outlines Greater Thaumasia was most likely created by a chain of volcanoes. The results were published recently in the Journal of Geophysical Research-Planets.

“The chemical changes we see moving northwestward through the region is consistent with the mantle evolving on Mars. Our research supports that this whole area was built as a volcanic construct,” said Don Hood, LSU Department of Geology and Geophysics doctoral candidate and lead author of the paper.

The chemical composition changes throughout the region. Silica and H20 increase and potassium decreases from southeast to northwest.

“The chemical composition shifting is the key progression that tells us that this environment was most likely shaped by a series of volcanic events that continually erupted from a changing mantle composition,” Hood said. [More at links]