ExoMars 2016: Hazards of landing on Mars 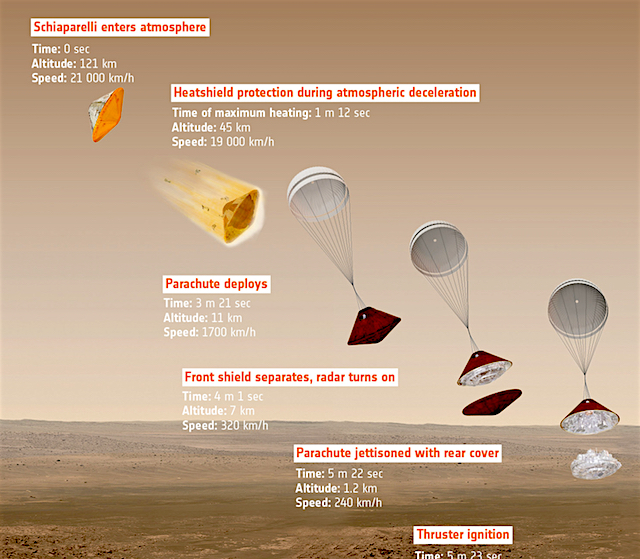 [On October 4,  ExoMars 2016 is 11 days from the separation of the Schiaparelli lander from the Trace Gas Orbiter, and 14 days from Schiaparelli's landing on Meridiani Planum. This ESA post describes the trials and tribulations of Mars landings since the early 1960s, and it details the plans for getting Schiaparelli down safely. — Ed.]

Mars has been a source of wonder for many centuries, inspiring both scientific speculation and literary imagination. Since the dawn of the Space Age, leading spacefaring nations have attempted to utilise modern technology to unveil the mysteries of Mars by surveying the planet from above and delivering robotic explorers onto its dusty terrain.

More than 40 missions have been despatched to the Red Planet since the early 1960s. Following the usual sequence of increasingly complex investigations, the early attempts to characterise Mars involved relatively straightforward, but short-lived, flybys. These were soon followed by orbiters, which carried ever more sophisticated instruments to map the entire planet and characterise its diverse landscapes… (…)

Schiaparelli is aiming for Meridiani Planum, a relatively smooth, flat region close to the Martian equator and fairly near the current location of NASA’s Opportunity rover. Three sites near the equator are currently being investigated for the ExoMars 2020 mission, which will deliver ESA’s first planetary rover. [Much more at link]