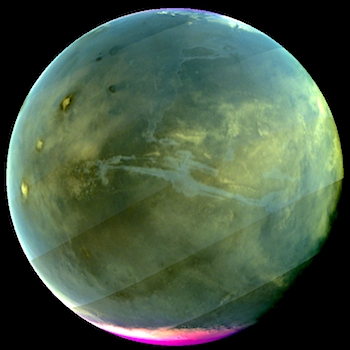 Today [October 3], MAVEN has completed one Mars year of science observations. One Mars year is just under two Earth years. MAVEN launched on Nov. 18, 2013, and went into orbit around Mars on Sept. 21, 2014. During its time at Mars, MAVEN has answered many questions about the Red Planet.

The spacecraft has made the following discoveries and science results:

• Most complete determination of the rate of loss of gas from the atmosphere to space and of how it is controlled by the sun, both during quiet times and during solar-storm events…

“Taken together, the MAVEN results tell us that loss of gas from the atmosphere to space has been the major force behind the climate having changed from a warm, wet environment to the cold, dry one that we see today,” said Bruce Jakosky, MAVEN principal investigator, from the Laboratory for Atmospheric and Space Physics at the University of Colorado Boulder.

NASA recently declared that MAVEN had achieved mission success during its primary mission. Mission success means that the spacecraft operated as intended, made the expected science measurements, and achieved its proposed science objectives.

MAVEN has been approved for an additional two-year extended mission that will run through the end of September 2018. [More at link]