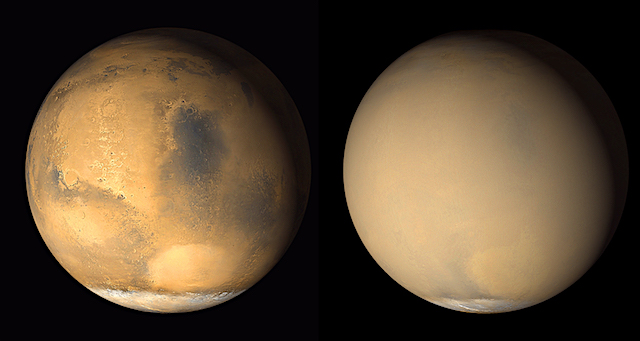 Global dust storms on Mars could soon become more predictable — which would be a boon for future astronauts there — if the next one follows a pattern suggested by those in the past.

A published prediction, based on this pattern, points to Mars experiencing a global dust storm in the next few months. “Mars will reach the midpoint of its current dust storm season on October 29th of this year. Based on the historical pattern we found, we believe it is very likely that a global dust storm will begin within a few weeks or months of this date,” said James Shirley, a planetary scientist at NASA’s Jet Propulsion Laboratory, Pasadena, California. (…)

The most recent Martian global dust storm occurred in 2007, significantly diminishing solar power available to two NASA Mars rovers then active halfway around the planet from each other — Spirit and Opportunity.

“The global dust storm in 2007 was the first major threat to the rovers since landing,” said JPL’s John Callas, project manager for Spirit and Opportunity. “We had to take special measures to enable their survival for several weeks with little sunlight to keep them powered. Each rover powered up only a few minutes each day, enough to warm them up, then shut down to the next day without even communicating with Earth. For many days during the worst of the storm, the rovers were completely on their own.” [More at links] 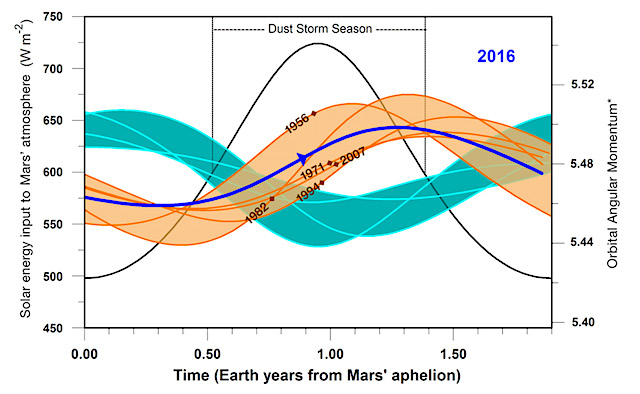