New global images of Mars from the MAVEN mission show the ultraviolet glow from the Martian atmosphere in unprecedented detail, revealing dynamic, previously invisible behavior. They include the first images of “nightglow” that can be used to show how winds circulate at high altitudes. Additionally, dayside ultraviolet imagery from the spacecraft shows how ozone amounts change over the seasons and how afternoon clouds form over giant Martian volcanoes. The images were taken by the MAVEN Imaging UltraViolet Spectrograph (IUVS).

“MAVEN obtained hundreds of such images in recent months, giving some of the best high-resolution ultraviolet coverage of Mars ever obtained,” said Nick Schneider of the Laboratory for Atmospheric and Space Physics at the University of Colorado Boulder. Schneider is presenting these results Oct. 19 at the American Astronomical Society Division for Planetary Sciences meeting in Pasadena, California. [More at link] 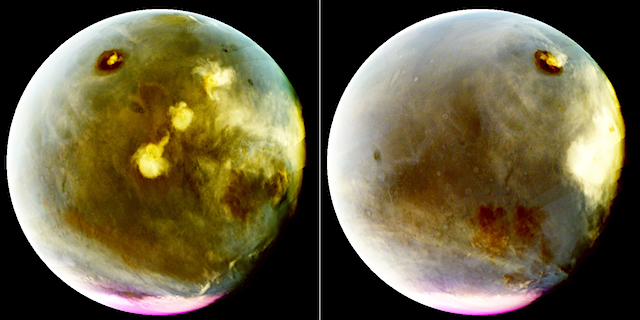