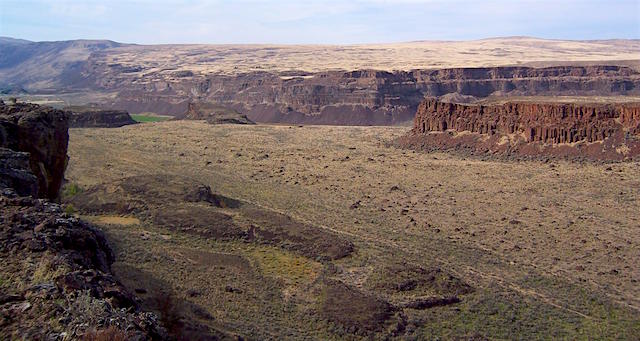 Geomorphologists who study Earth’s surface features and the processes that formed them have long been interested in how floods, in particular catastrophic outbursts that occur when a glacial lake ice dam bursts, for example, can change a planet’s surface, not only on Earth but on Mars.

Now geoscience researchers Isaac Larsen at the University of Massachusetts Amherst and Michael Lamb at the California Institute of Technology have proposed and tested a new model of canyon-forming floods which suggests that deep canyons can be formed in bedrock by significantly less water than previously thought. They point out that “reconstructing the magnitude of the canyon-forming floods is essential for understanding how floods modify planetary surfaces, the hydrology of early Mars, and abrupt climate change.”

Larsen and Lamb apply their new model to the “channeled scablands” in eastern Washington State, an area that, like some on Mars, has very deep canyons cut into fractured basalt bedrock. The researchers say their results suggest “there may be a rich imprint of both the history and discharge of flooding in the morphology of canyons” such as terraces, valley shapes and slope profiles on Earth and on Mars “that warrant further investigation.” Details appear in the current issue of Nature. (…)

In areas underlain by fractured bedrock, Larsen says, “our general concept is that the channel floor was being cut and lowered as the floods were happening, and you need to account for that when reconstructing the scenario of flood magnitude. This applies to the scablands, to Mars and other areas where there have been catastrophic outburst floods.” [More at links]