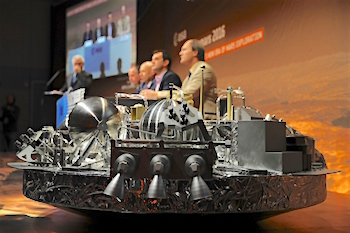 [Editor note: Report by Elizabeth Gibney in Nature] Photos of a huge circle of churned-up Martian soil leave few doubts: a European Space Agency (ESA) probe that was supposed to test landing technology on Mars crashed into the red planet instead, and may have exploded on impact. (… )

Figuring out Schiaparelli’s faults and rectifying them is a priority, says Jorge Vago, project scientist for ExoMars. “That’s super important. I think it’s on everybody’s mind.”

(…) But at 4 minutes and 41 seconds into an almost 6-minute fall, something went wrong. The lander’s heat shield and parachute ejected ahead of time, says Vago. Then thrusters, designed to decelerate the craft for 30 seconds until it was metres off the ground, engaged for only around 3 seconds before they were commanded to switch off, because the lander’s computer thought it was on the ground. (…) The most likely culprit is…  [More at link]