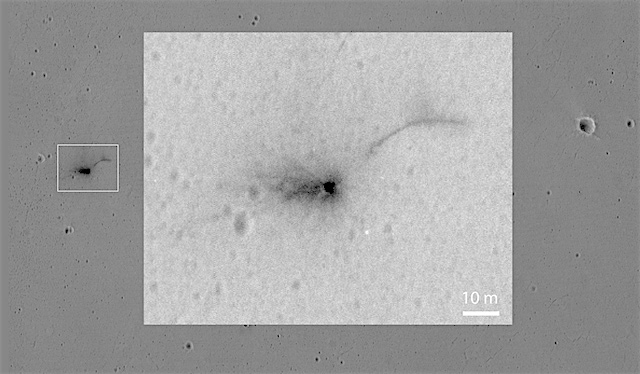 [Editor note: More at the ExoMars and HiRISE sites]

The most powerful telescope orbiting Mars is providing new details of the scene near the Martian equator where Europe’s Schiaparelli test lander hit the surface last week.

The scene shown by HiRISE includes three locations where hardware reached the ground. A dark, roughly circular feature [see image above] is interpreted as where the lander itself struck. A pattern of rays extending from the circle suggests that a shallow crater was excavated by the impact, as expected given the premature engine shutdown.

About 0.8 mile (1.4 kilometers) eastward, an object with several bright spots surrounded by darkened ground is likely the heat shield.

About 0.8 mile (1.4 kilometers) south of the lander impact site, two features side-by-side are interpreted as the spacecraft’s parachute and the back shell to which the parachute was attached. Additional images to be taken from different angles are planned and will aid interpretation of these early results. [More at links]