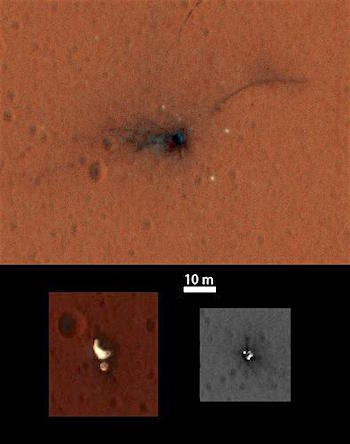 New high-resolution images taken by a NASA orbiter show parts of the ExoMars Schiaparelli module and its landing site in colour on the Red Planet.

Schiaparelli arrived in the Meridiani Planum region on Mars on 19 October, while its mothership began orbiting the planet. The Trace Gas orbiter will make its first science observations during two of its highly elliptical circuits around Mars – corresponding to eight days – starting on 20 November, including taking its first images of the planet since arriving.

The new image of Schiaparelli and its hardware components was taken by NASA’s Mars Reconnaissance Orbiter, or MRO, on 1 November. The main impact site is now captured in the central portion of the swath that is imaged by the high-resolution camera through three filters, enabling a colour image to be constructed.

In addition, the image of 1 November was taken looking slightly to the west, while the earlier image was looking to the east, providing a contrasting viewing geometry. [More at links]