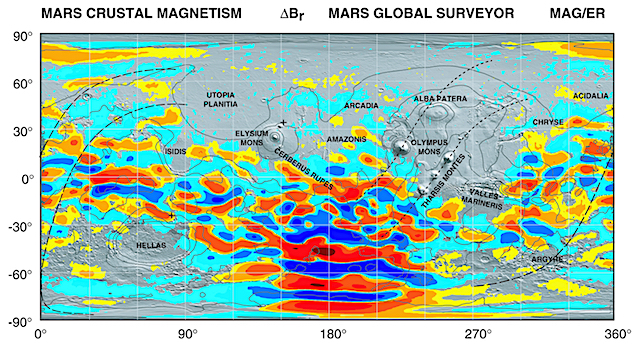 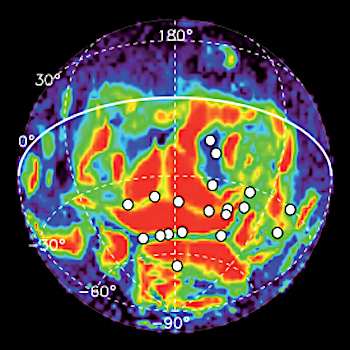 Scattered pockets of magnetism across the surface of Mars have a significant influence on the planet’s upper atmosphere, according to observations from ESA’s Mars Express. Understanding these effects may be crucial for ensuring safe radio communications between Mars and Earth and, eventually, between explorers on the surface of the planet.

Earth’s magnetic field is dominated by a single, strong source: the dynamo deep below the planet’s surface. However, the same cannot be said for Mars. Rather than possessing a single source of magnetic field, Mars has many.

The Red Planet has numerous pockets of strong magnetism locked up within its crust, remnants from its earliest days. Modern-day Mars may be known for its relative lack of magnetism but young Mars was likely a different world; it was probably warmer and wetter, with a denser atmosphere and a hotter core. Scientists believe the young planet also had a sizeable magnetic field, driven by the circulating motion of molten material within its core (known as a planetary dynamo).

This global field switched off long ago – likely as the core cooled and solidified, freezing the dynamo in place – but the planet still boasts anomalous patches of strong remnant magnetism spread across its surface, known as ‘crustal fields’. [More at link]