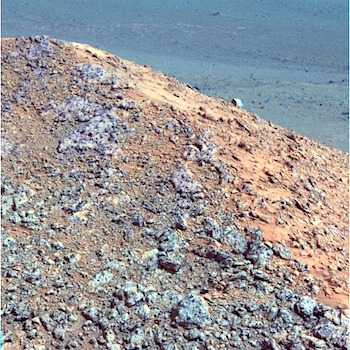 November 5, 2016: Opportunity Scales Spirit Mound, Takes Shot at Schiaparelli: Deep in the western rim of Endeavour Crater at Cape Tribulation, Opportunity spent the month of October on Spirit Mound studying the rich yet familiar geology at the first science stop on the Mars Exploration Rovers (MER) 10th extended mission – pausing only to take a shot at freeze-framing part of the descent of Europe’s Schiaparelli lander. (…)

Schiaparelli hit the Martian atmosphere and began “six minutes of hell” as scheduled on October 19th and sped toward the surface of the Red Planet. Traveling at 21,000 kilometers per hour, the small European spacecraft was aiming for a target ellipse in Meridiani Planum not far from where Opportunity landed in 2004. The spacecraft was to deploy and jettison a parachute and then fire retro rockets to “soft land” on the surface. (…)

Even if both lander and Opportunity succeeded, the parachute would only show up as one pixel in the rover’s Pancam frames. And it would be difficult to define. Nevertheless, in addition to allocating some of their downlink time to the ESA mission, the MER team staged two dress rehearsals for Opportunity and her Panoramic Camera (Pancam).

“We just don’t get that many chances to image things that are landing on the surface of another world,” said John Callas, MER Project Manager, of the Jet Propulsion Laboratory (JPL), home to all NASA’s Mars rovers. Besides that, he added: “We wanted to support our fellow Mars explorers and allow them the best chance for success.”  [More at link]