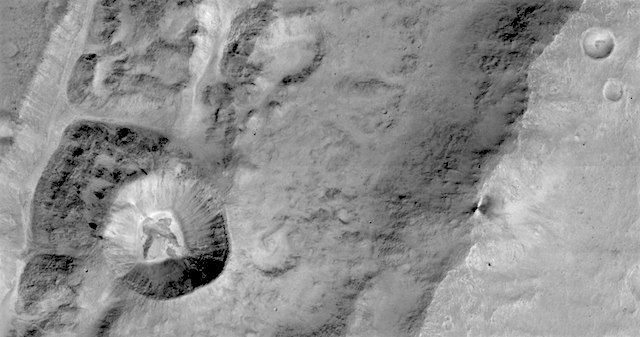 The Mars Camera, CaSSIS, on the ExoMars Trace Gas Orbiter captured its first high resolution images of the Red Planet last week. The Bernese camera worked almost perfectly and has provided spectacular views of the surface.

CaSSIS (Colour and Stereo Surface Imaging System) has been developed by a team from the University of Bern led by Prof. Nicolas Thomas from the Center of Space and Habitability (CSH). It was launched with the European Space Agency’s ExoMars Trace Gas Orbiter (TGO) on 14 March 2016. TGO entered orbit around Mars on 19 October. The onboard camera, CaSSIS, has returned its first images from orbit.

“The first images we received are absolutely spectacular – and it was only meant to be a test,” says Nicolas Thomas. (…)

TGO is currently in a highly elliptical orbit of just over 4 days duration. The spacecraft comes within 250 km of the surface for a very short period but then goes out to over 100’000 km from the planet. CaSSIS has imaged during two of these close approaches to test its capabilities and functions. The first approach occurred on 22 November.

“A lot of public attention has been on the failed landing of Schiaparelli, but TGO has been working really well so we have been extremely busy in the past month,” says Nicolas Thomas. [More at link, including video, and here]