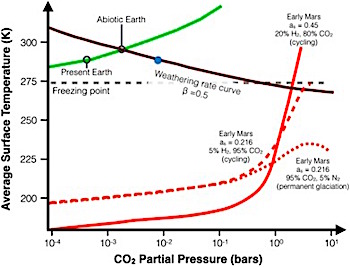 Dramatic climate cycles on early Mars, triggered by buildup of greenhouse gases, may be the key to understanding how liquid water left its mark on the planet’s surface, according to a team of planetary scientists.

Scientists have long debated how deep canyons and extensive valley networks — like the kinds carved by running water over millions of years on Earth — could form on Mars some 3.8 billion years ago, a time many believe the planet was frozen.

The researchers suggest a glacier-covered early Mars could have experienced long warm periods, lasting up to 10 million years at a time, caused by a thick atmosphere of carbon dioxide and hydrogen.

The team, which published its findings [December 1] in the journal Earth and Planetary Science Letters, found the warming cycles would have lasted long enough, and produced enough water, to create the features.

“With the cycling hypothesis, you get these long periods of warmth that give you sufficient time to form all the different Martian valley networks,” said Natasha Batalha, graduate student, astronomy and astrophysics, Penn State. [More at links]

This entry was posted in Reports and tagged climate, climate change, climate cycles. Bookmark the permalink.