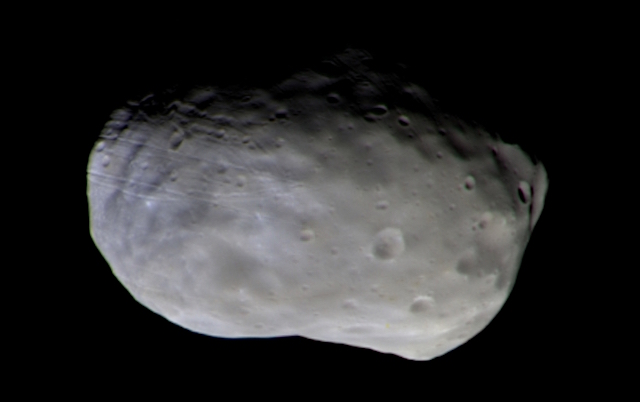 The ExoMars Trace Gas Orbiter has imaged the martian moon Phobos as part of a second set of test science measurements made since it arrived at the Red Planet on 19 October.

The Trace Gas Orbiter (TGO), a joint endeavour between ESA and Roscosmos, made its first scientific calibration measurements during two orbits between 20 and 28 November.

Example data from the first orbit were published last week, focusing on Mars itself. During the second orbit, the instruments made a number of measurements of Phobos, a 27×22×18 km moon that orbits Mars at a distance of only 6000 km.

The camera imaged the moon on 26 November from a distance of 7700 km, during the closest part of the spacecraft’s orbit around Mars. TGO’s elliptical orbit currently takes it to within 230–310 km of the surface at its closest point and around 98 000 km at its furthest every 4.2 days.

A colour composite has been created from several individual images taken through several filters. The camera’s filters are optimised to reveal differences in mineralogical composition, seen as ‘bluer’ or ‘redder’ colours in the processed image. [More at link, including a red/blue anaglyph]