It’s young, it has been shattered and naturally recemented, and it’s about ten times richer in water than any other Mars meteorite. And if the scientists who studied it are right, it’s the also first meteorite to come from the Martian crust. 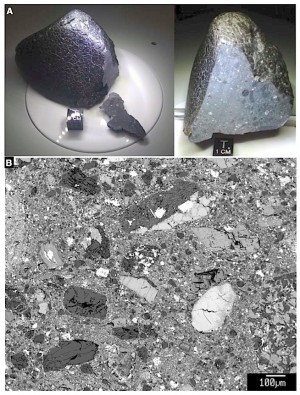 BLACK BEAUTY. Northwest Africa 7034 would fit comfortably in your hand. It achieves several Mars meteorite landmarks: it’s the first basalt breccia, it contains about 10 times the water of any other Mars meteorite, it’s 2.1 billion years old, and it appears to be a piece of Martian crust. (Image taken from Figure 1 in the paper.)

Northwest Africa (NWA) 7034 is a fist-size chunk of basaltic breccia found in the Sahara Desert and bought from a Moroccan meteorite dealer in 2011. It bears the nickname “Black Beauty.”

When it fell to Earth is unknown, but it last crystallized 2.1 billion years ago. This places it in the early Amazonian epoch of Martian geologic history, says Carl Agee (University of New Mexico), who led a group of scientists publishing their findings in Science.

Agee notes, “The basaltic rock in this meteorite is consistent with the crust or upper mantle of Mars, based on findings from recent Martian rovers and orbiters.” He adds that the team’s analysis of the oxygen isotopes shows that NWA 7034 is unlike any other meteorites or planetary samples. “The chemistry is consistent with a surface origin and an interaction with the Martian atmosphere,” Agee says.

Co-author Andrew Steele (Carnegie Institution) adds, “The texture of the NWA meteorite is not like any of the SNC meteorites. It is made of cemented fragments of basalt, rock that forms from rapidly cooled lava, dominated with feldspar and pyroxene, most likely from volcanic activity.”