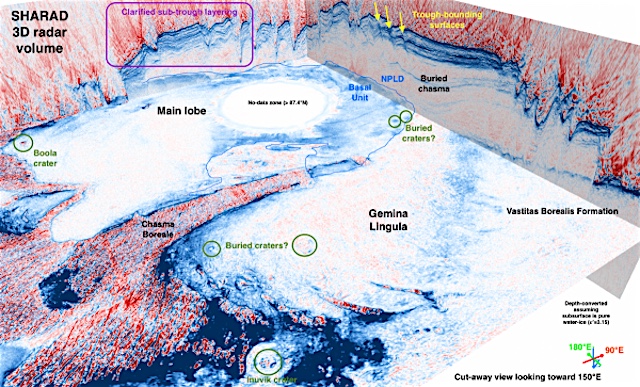 Three-dimensional subsurface images are revealing structures within the Martian polar ice caps, including previously obscured layering, a larger volume of frozen carbon dioxide contained in the south polar cap, and bowl-shaped features that may be buried impact craters within both polar caps.

This information will help scientists better understand Martian climate changes and may allow them to determine the age of the polar caps without using climate models. The 3-D data volumes were assembled from observations by the Shallow Radar (SHARAD) onboard NASA’s Mars Reconnaissance Orbiter (MRO) during more than 2000 orbit passes over each Martian pole.

“We have applied industry-developed techniques in a very novel fashion to a Martian dataset, producing 3-D volumes that are each over 600 times larger than any terrestrial or planetary dataset of this kind,” said Nathaniel E. Putzig, a Senior Scientist at the Planetary Science Institute and co-author of “3-D Imaging of Mars’ Polar Ice Caps using Orbital Radar Data” that appears in a special section on remote sensing in the January issue of “The Leading Edge.”

“It is gratifying to see so plainly in the SHARAD volumes structures that took years of effort to characterize with the single-orbit profiles,” Putzig said. “I’m excited about what we will learn from newly revealed features such as the probable impact craters.” [More at link]