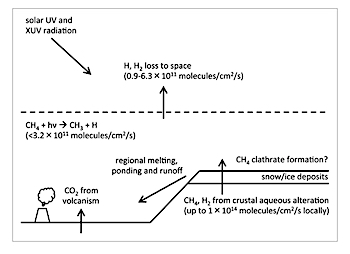 The presence of water on ancient Mars is a paradox. There’s plenty of geographical evidence that rivers periodically flowed across the planet’s surface. Yet in the time period when these waters are supposed to have run — three to four billion years ago — Mars should have been too cold to support liquid water.

So how did it stay so warm?

Researchers from the Harvard John A. Paulson School of Engineering and Applied Sciences (SEAS) suggest that early Mars may have been warmed intermittently by a powerful greenhouse effect. In a paper published in Geophysical Research Letters, researchers found that interactions between methane, carbon dioxide and hydrogen in the early Martian atmosphere may have created warm periods when the planet could support liquid water on the surface.

“Early Mars is unique in the sense that it’s the one planetary environment, outside Earth, where we can say with confidence that there were at least episodic periods where life could have flourished,” said Robin Wordsworth, assistant professor of environmental science and engineering at SEAS, and first author of the paper. “If we understand how early Mars operated, it could tell us something about the potential for finding life on other planets outside the solar system.” [More at links]