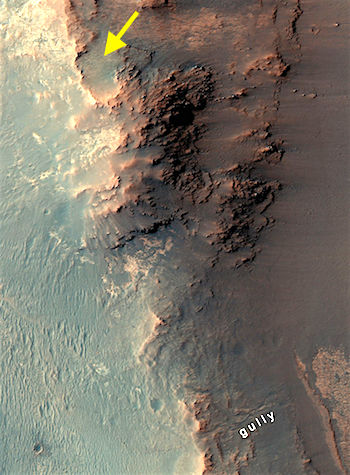 February 5, 2017: Opportunity Celebrates the Big 1-3, Begins 14th Year of Ops!: As people all around Earth partied and watched fireworks signal the launch of 2017, some 45 million miles away the New Year got off to a start that was unprecedented in every good way: the Mars Exploration Rover (MER) mission completed its 13th Earth year of surface operations and Opportunity drove the first overland expedition of the Red Planet into its 14th year, giving the world something to be universally proud of in January.

More than 13 years on Mars on a mission that began as a three-month tour. Talk about right stuff. “I don’t think anyone in 2004 thought that we’d be commanding this bad girl in 2017,” said MER Deputy Principal Investigator Ray Arvidson of Washington University St. Louis. “It’s just truly amazing.”

And Opportunity is not slowing down. In fact, this robot field geologist is on her way to an ancient gully and traversing now some of the most treacherous terrain she has ever encountered to get to what just may be the most significant research site the mission will visit on its quest to “Follow the Water” and find evidence for past environments that once may have been inhabitable.

“This gully has been calling us for years now,” said MER Principal Investigator, Steve Squyres, of Cornell University. “We saw this thing a long time ago and for the longest time I didn’t even dare talk about it, because it seemed so impossibly far off.” [More at link]