Curiosity: Drill brake issue, ChemCam, REMS, and the terrain ahead 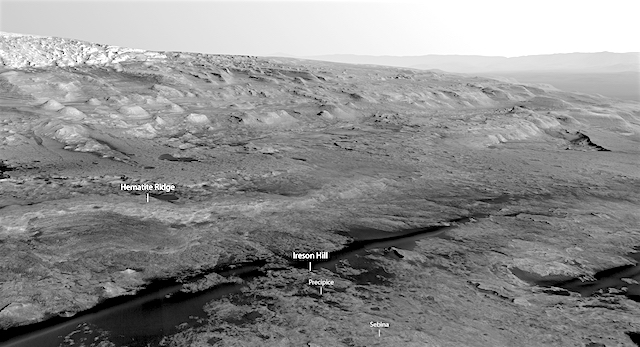 [Editor note: Blog post by Emily Lakdawalla, the Planetary Society] Since my last update, the Curiosity mission has developed a better understanding of the problem that prevented them from drilling at Precipice, but its intermittent nature has slowed the development of a workable solution that will allow them to use the drill again. In the meantime, the rover has driven onward, making good use of its other instruments, but unfortunately passing by two locations (Precipice and one other) where drilling would have continued the team’s rhythmic survey of the Murray mudstones.

The rover is now approaching a new band of active sand dunes, different from the ones explored at the northern edge of the dune field, and plans to spend several weeks in dune investigations, using the scoop to sample and deliver sand to CheMin and SAM. (Scooping activities are unaffected by the drill problems.) The time spent at the sand dunes will enable arm engineers to spend time troubleshooting the drill. (…)