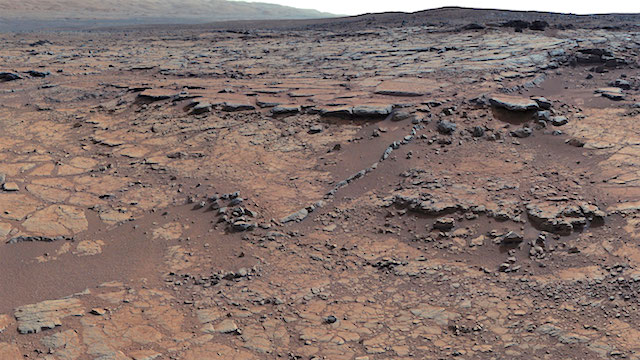 Mars scientists are wrestling with a problem. Ample evidence says ancient Mars was sometimes wet, with water flowing and pooling on the planet’s surface. Yet, the ancient sun was about one-third less warm and climate modelers struggle to produce scenarios that get the surface of Mars warm enough for keeping water unfrozen.

A leading theory is to have a thicker carbon-dioxide atmosphere forming a greenhouse-gas blanket, helping to warm the surface of ancient Mars. However, according to a new analysis of data from NASA’s Mars rover Curiosity, Mars had far too little carbon dioxide about 3.5 billion years ago to provide enough greenhouse-effect warming to thaw water ice.

The same Martian bedrock in which Curiosity found sediments from an ancient lake where microbes could have thrived is the source of the evidence adding to the quandary about how such a lake could have existed. Curiosity detected no carbonate minerals in the samples of the bedrock it analyzed. The new analysis concludes that the dearth of carbonates in that bedrock means Mars’ atmosphere when the lake existed — about 3.5 billion years ago — could not have held much carbon dioxide.

“We’ve been particularly struck with the absence of carbonate minerals in sedimentary rock the rover has examined,” said Thomas Bristow of NASA’s Ames Research Center, Moffett Field, California. “It would be really hard to get liquid water even if there were a hundred times more carbon dioxide in the atmosphere than what the mineral evidence in the rock tells us.” Bristow is the principal investigator for the Chemistry and Mineralogy (CheMin) instrument on Curiosity and lead author of the study being published this week in the Proceedings of the National Academy of Science. [More at links]