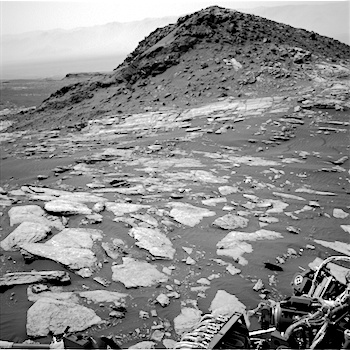 Sol 1604-05, February 10, 2017, update by USGS scientist Ryan Anderson: On Sol 1604 we wrapped up at the first stop of this second phase of the Bagnold Dune campaign. The plan started off, as usual for the dune campaign, with a pair of Mastcam images that were then repeated throughout the day to look for changes. ChemCam had an RMI of the target “Mapleton” and then Mastcam had a whole series of images of nearby sand formations. Once that was taken care of, we decided to drive back toward Ireson Hill so that we can take a closer look at some of the geology there. The drive was about 55 meters, followed by… [More at link]