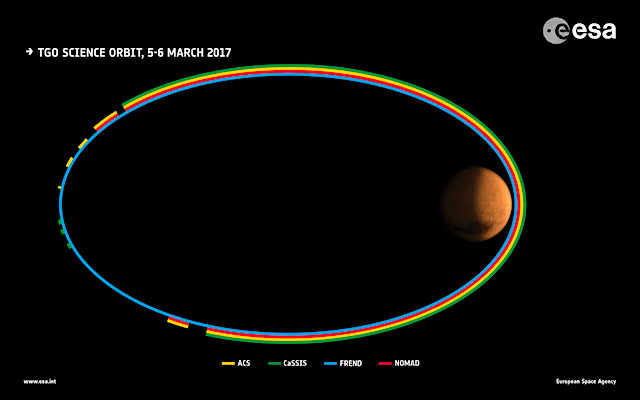 Next week, the ExoMars orbiter will devote two days to making important calibration measurements at the Red Planet, which are needed for the science phase of the mission that will begin next year.

The Trace Gas Orbiter (TGO), a joint endeavour between ESA and Roscosmos, arrived at Mars on 19 October. During two dedicated orbits in late November, the science instruments made their first calibration measurements since arriving at Mars. These included images of Mars and one of its moons, Phobos, and basic spectral analyses of the martian atmosphere.

The main science mission will only begin once it reaches a near-circular orbit about 400 km above the planet’s surface after a year of ‘aerobraking’ – using the atmosphere to gradually brake and change its orbit.

Earlier this year, in preparation for the aerobraking phase, TGO conducted a series of manoeuvres to shift its angle of travel with respect to the planet’s equator to almost 74º. This raised it from a near-equatorial arrival orbit to one that flies over more of the northern and southern hemispheres.

This inclination will provide optimum coverage of the surface for the science instruments, while still offering good visibility for relaying data from current and future landers – including the ExoMars rover scheduled for launch in 2020. [More at link, including video]