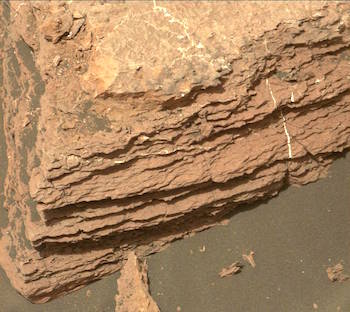 Sol 1623-24, February 27, 2017, update by USGS scientist Lauren Edgar: Today’s two-sol plan is devoted to MAHLI diagnostics and remote sensing.  It’s another late slide sol, so planning started three and half hours later than usual.  The plan kicks off with arm activities to better understand the fault that MAHLI experienced last week.  Then ChemCam will investigate “Dunn Brook,” a target that is just above “Chase Brook” from the weekend plan, and is shown in the above Mastcam image.  The target shows some interesting color variations so ChemCam will be used to investigate changes in composition.  We’ll also acquire a ChemCam observation of “Leighton,” to study the coarse sand grains at the crest of a ripple. Then Navcam will look for dust devils and clouds, in response to orbital observations that suggest recent increasing atmospheric opacity.  On the second sol… [More at link]