HRSC: Remnants of a mega-flood 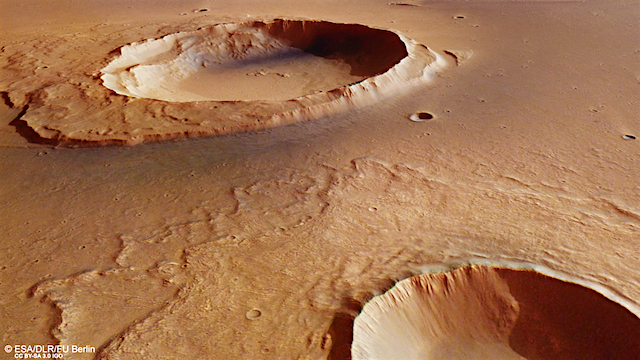 ESA’s Mars Express has captured images of one of the largest outflow channel networks on the Red Planet.

The Kasei Valles channel system extends around 3000 km from its source region in Echus Chasma – which lies east of the bulging volcanic region Tharsis and just north of the Valles Marineris canyon system – to its sink in the vast plains of Chryse Planitia.

A combination of volcanism, tectonics, collapse and subsidence in the Tharsis region led to several massive groundwater releases from Echus Chasma, which subsequently flooded the Kasei Valles region around 3.6–3.4 billion years ago. These ancient mega-floods have left their mark on the features seen today.

Sections of Kasei Valles have already been imaged by Mars Express during its 14 years at the Red Planet, but this new image, taken on 25 May 2016, captures a portion right at its mouth.

A 25 km-wide impact crater – Worcester Crater – just left to the centre of the main colour image, has done its best to stand up to the erosive forces of the mega-floods.

While much of the blanket of material surrounding the crater – which was originally thrown out from inside the crater during the impact – has been eroded, the section downstream of the flood has survived. Over time this has led to the overall appearance of a streamlined island, with its stepped topography downstream perhaps suggesting variations in water levels or different flood episodes. [More at link]