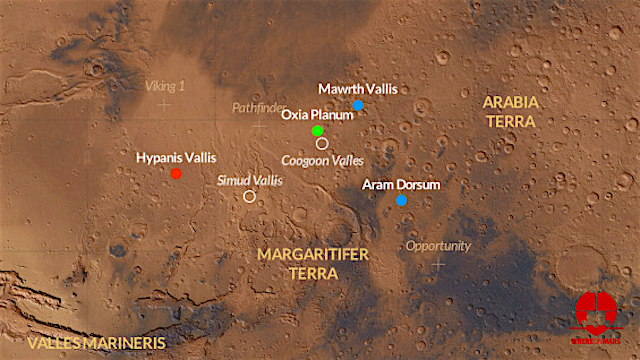 The ExoMars rover and surface platform will launch in 2020. The primary objective is to land at a site with high potential for finding well-preserved organic material, particularly from the very early history of the planet.

While the surface platform will remain stationary at the landing site, the rover is expected to travel several kilometres during its time on Mars, and to drill down to two metres below the surface to collect samples for analysis in the rover’s onboard laboratory. Underground samples are more likely to include possible chemical biosignatures in a good state of conservation, since the tenuous martian atmosphere offers little protection from radiation to complex molecules at the surface.

At the previous landing site selection workshop, which took place in October 2015, the Landing Site Selection Working Group (LSSWG) chose three landing sites for detailed study. At the time, the ExoMars rover was scheduled for launch in 2018 and Oxia Planum was identified as the primary choice. (…)

The final decision about where to land the rover is expected to take place no later than mid-2019. [More at links]