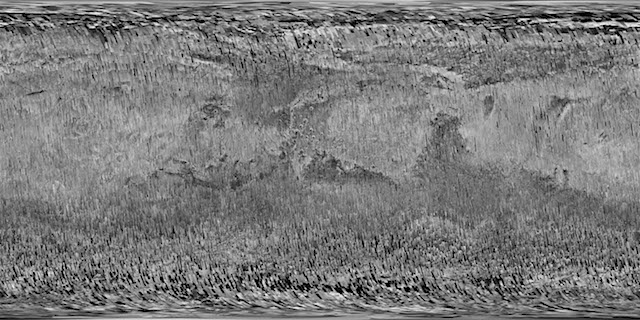 The most data-productive spacecraft yet at Mars swept past its 50,000th orbit this week, continuing to compile the most sharp-eyed global coverage ever accomplished by a camera at the Red Planet.

In addition, the spacecraft — NASA’s Mars Reconnaissance Orbiter (MRO) — recently aided preparations for NASA’s next mission to Mars, the InSight lander. Insight will launch next year on a mission to study the planet’s deep interior. Meanwhile, the orbiter continues diverse science observations of Mars and communications-relay service for two active Mars rovers, Curiosity and Opportunity.

MRO’s Context Camera (CTX) exploits a sweet spot in the balance between resolution and image file size. With a resolution of about 20 feet (6 meters) per pixel in images of the Martian surface, it has provided a library of images now covering 99.1 percent of Mars. That is approximately equivalent to the land area of Earth. No other camera ever sent to Mars has photographed so much of the planet in such high resolution.

The Context Camera has taken about 90,000 images since the spacecraft began examining Mars from orbit in late 2006. Each one reveals shapes of features down to sizes smaller than a tennis court, in a swath of ground about 18.6 miles (30 kilometers) wide.

“Reaching 99.1-percent coverage has been tricky because a number of factors, including weather conditions, coordination with other instruments, downlink limitations, and orbital constraints, tend to limit where we can image and when,” said Context Camera Team Leader Michael Malin of Malin Space Science Systems, San Diego. [More at link]