Ground-penetrating radar on NASA’s Mars Reconnaissance Orbiter (MRO) reveals buried channels that show floods of water from Cerberus Fossae eroded Marte Vallis in two distinct stages, and they did so to a much greater extent than is visible today. 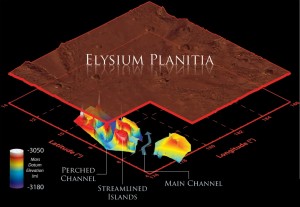 DEEP SCOURING. Ground-penetrating radar shows the channel bed of Marte Vallis is about twice as deep as previously thought. Also details of the channel show that it was eroded in two major episodes of flooding. (Image: NASA/JPL-Caltech/Sapienza University of Rome/Smithsonian Institution/USGS)

The Shallow Radar (SHARAD) instrument on MRO detects radar-reflecting surfaces underground. These may be due to changes in rock types or the presence of water or ice, or other geological differences.

A team of scientists led by Gareth Morgan (Center for Earth and Planetary Studies, Smithsonian Institution) used 58 SHARAD data tracks to probe the subsurface of Marte Vallis, a young outflow channel in Elysium Planitia. Marte is about 1,000 kilometers (620 miles) long and 100 km (62 mi) wide and slopes down to the northeast into Amazonis. The team report appears in Science.

SHARAD data let the team make a 3D reconstruction of Marte’s buried channel beds. The results show that the upper end of the valley connects to a now-buried portion of the Cerberus Fossae fracture zone. Previously, scientists had been unable to tell whether the valley’s source was at Cerberus or Athabasca, farther to the west.

“The channel alignment at the source matches the orientation of the Cerberus Fossae graben system,” the scientists write. They add that they found that the Cerberus fractures extend at least 180 km (112 mi) east of their present apparent end, thus reaching Marte and supporting the hypothesis that Cerberus was the source of the Marte Vallis floods.

Looking at the subsurface shape of the channel bed using the radar, the researchers identified two probable stages of the valley’s erosion. The first flowed around several islands in the channel, leaving them streamlined. Then as the flow continued, a main channel developed which cut deeper and left a ledge or shoulder around high-standing islands. Geologists call such features perched or hanging valleys.

In regard to the main channel, the radar data led the team to estimate its depth as 69 to 113 m (170 to 290 ft). “This is comparable with the depth of incision of the largest known megaflood on Earth, the Missoula floods, responsible for carving the Channeled Scabland of the northwestern United States,” they explain. The scientists add that these channel depths are at least double the previous maximum estimates for Marte Vallis (40 meters). “The scale of these floods has been underestimated.”

Some researchers have argued that Marte could have been eroded by lava flows. The Morgan team disagrees. “While they are filled with later lavas, our tomographic models show that the Marte Vallis channels are morphologically similar to the circum-Chryse outflow channels, and thus could reasonably have been carved entirely by water.”