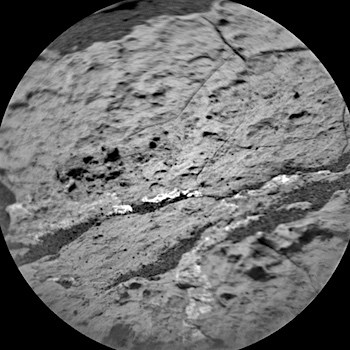 Sol 1664-65, April 10, 2017, update by USGS scientist Ken Herkenhoff: MSL drove about 24 meters on Sol 1662, and another drive is planned for Sol 1664.  Before the drive, lots of targeted remote sensing is planned:  ChemCam and Right Mastcam will observe a bright rock named “Peaks Island,” an exposure of bedding dubbed “Great Wass Island,” a sand ripple called “Baldpate Mountain,” and an interesting rock that was selected by AEGIS after the Sol 1662 drive, now named “Chebeague Island.”  Mastcam will also acquire a stereo mosaic of outcrops toward the south, in the direction of the planned drive. [More at link]