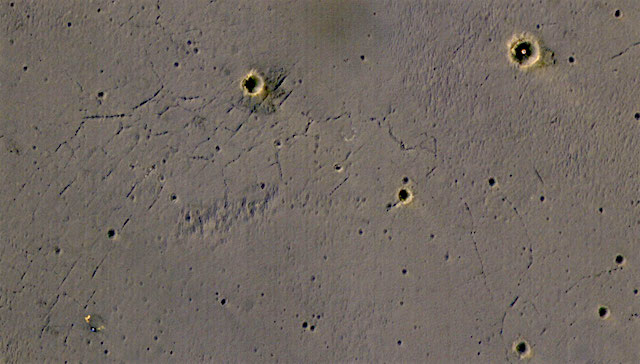 A new observation from NASA’s Mars Reconnaissance Orbiter (MRO) captures the landing platform that the rover Opportunity left behind in Eagle Crater more than 13 years and 27 miles (or 44 kilometers) ago.

A series of bounces and tumbles after initial touchdown plunked the airbag-cushioned lander into the crater, a mere 72 feet (22 meters) across, on Jan. 25, 2004, Universal Time (Jan. 24, PST).

This is the first view from HiRISE of the Eagle Crater scene. Mars Reconnaissance Orbiter began orbiting Mars more than two years after Opportunity’s landing. One of the first images from HiRISE in 2006 showed Opportunity at the rim of a much larger crater, Victoria, nearly 4 miles (about 6 kilometers) south of the landing site.

Eagle Crater is at the upper right of the new image. The lander platform’s job was finished once the rover rolled off it. The parachute and backshell are at the lower left. [More at link]