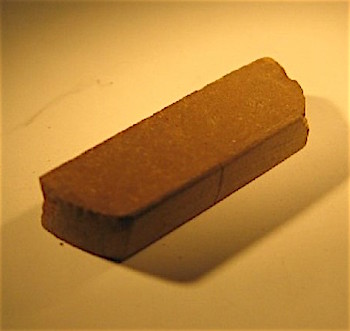 Explorers planning to settle on Mars might be able to turn the planet’s red soil into bricks without needing to use an oven or additional ingredients. Instead, they would just need to apply pressure to compact the soil—the equivalent of a blow from a hammer.

These are the findings of a study published in Nature Scientific Reports on April 27, 2017. The study was authored by a team of engineers at the University of California San Diego and funded by NASA. The research is all the more important since Congress passed a bill, signed by President Donald Trump in March 2017, directing NASA to send a manned mission on Mars in 2033.

“The people who will go to Mars will be incredibly brave. They will be pioneers. And I would be honored to be their brick maker,” said Yu Qiao, a professor of structural engineering at UC San Diego and the study’s lead author. [More at links]

This entry was posted in Reports and tagged bricks, regolith. Bookmark the permalink.