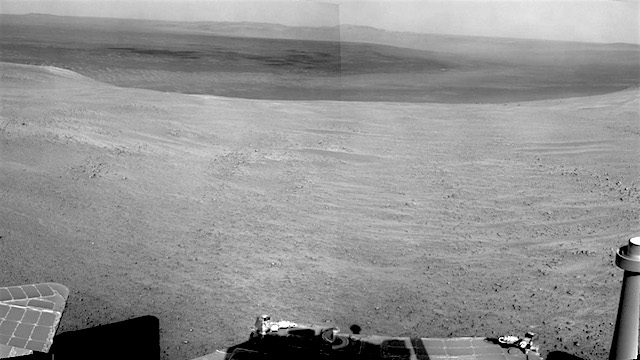 NASA’s Mars Exploration Rover Opportunity has reached the main destination of its current two-year extended mission — an ancient fluid-carved valley incised on the inner slope of a vast crater’s rim.

As the rover approached the upper end of “Perseverance Valley” in early May, images from its cameras began showing parts of the area in greater resolution than what can be seen in images taken from orbit above Mars.

“The science team is really jazzed at starting to see this area up close and looking for clues to help us distinguish among multiple hypotheses about how the valley formed,” said Opportunity Project Scientist Matt Golombek of NASA’s Jet Propulsion Laboratory, Pasadena, California.

The process that carved Perseverance Valley into the rim of Endeavour Crater billions of years ago has not yet been identified. Among the possibilities: It might have been flowing water, or might have been a debris flow in which a small amount of water lubricated a turbulent mix of mud and boulders, or might have been an even drier process, such as wind erosion. The mission’s main objective with Opportunity at this site is to assess which possibility is best supported by the evidence still in place. [More at link]