Subsurface as the key to surface on Martian gullies 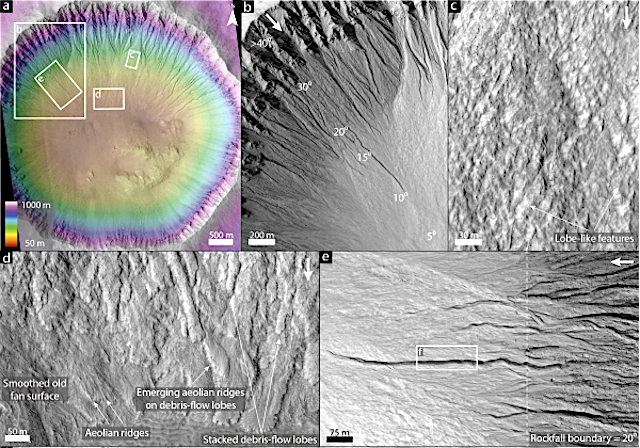 Planetary Geomorphology Image of the Month, May 31, 2017: T. de Has (Durham University). Martian gullies are composite landforms that comprise an alcove, channel and depositional fan. They are very young geological features, some of which have been active over the last million years. Water-free sediment flows, likely triggered by CO2 sublimation, debris flows, and fluvial flows have all been hypothesized to have formed gullies. These processes require very different amounts of liquid water, and therefore their relative contribution to gully-formation is of key importance for climatic inferences. Formative inferences based on surface morphology may be biased however, because of substantial post-depositional modification.

Many authors have used the surface morphology of gully-fans to infer the formative processes of gullies. In particular, the general absence of paired levees, distinct depositional snouts, and boulders >1 m in diameter, all characteristic of sediment-gravity flows such as debris flows and dry granular flows, has often been interpreted as evidence for gully-formation by fluvial flows. [More at link]

This entry was posted in Reports and tagged gullies. Bookmark the permalink.