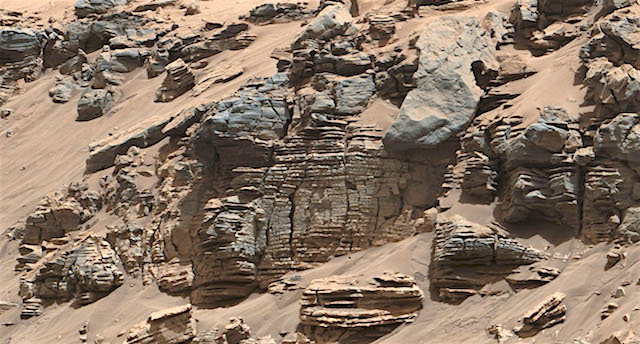 A long-lasting lake on ancient Mars provided stable environmental conditions that differed significantly from one part of the lake to another, according to a comprehensive look at findings from the first three-and-a-half years of NASA’s Curiosity rover mission.

Previous work had revealed the presence of a lake more than three billion years ago in Mars’ Gale Crater. This study defines the chemical conditions that existed in the lake and uses Curiosity’s powerful payload to determine that the lake was stratified. Stratified bodies of water exhibit sharp chemical or physical differences between deep water and shallow water. In Gale’s lake, the shallow water was richer in oxidants than deeper water was.

“These were very different, co-existing environments in the same lake,” said Joel Hurowitz of Stony Brook University, Stony Brook, New York, lead author of a report of the findings in the June 2 edition of the journal Science. “This type of oxidant stratification is a common feature of lakes on Earth, and now we’ve found it on Mars. The diversity of environments in this Martian lake would have provided multiple opportunities for different types of microbes to survive, including those that thrive in oxidant-rich conditions, those that thrive in oxidant-poor conditions, and those that inhabit the interface between those settings.” [More at links]