Valley networks point to much wetter past 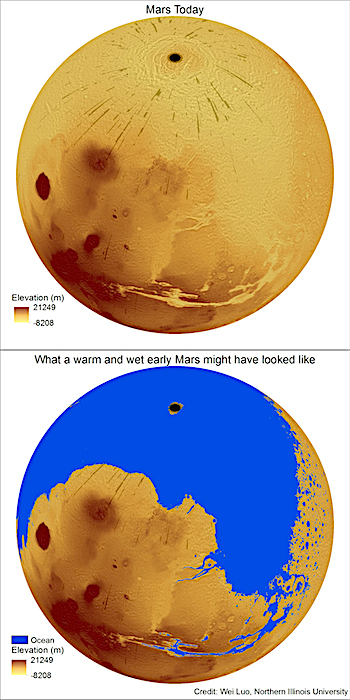 A new study led by Northern Illinois University geography professor Wei Luo calculates the amount of water needed to carve the ancient network of valleys on Mars and concludes the Red Planet’s surface was once much more watery than previously thought.

The study bolsters the idea that Mars once had a warmer climate and active hydrologic cycle, with water evaporating from an ancient ocean, returning to the surface as rainfall and eroding the planet’s extensive network of valleys.

Satellites orbiting Mars and rovers on its surface have provided scientists with convincing evidence that water helped shape the planet’s landscape billions of years ago. But questions have lingered over how much water actually flowed on the planet, and the ocean hypothesis has been hotly debated.

In the new study, published June 5, in the online journal Nature Communications, Luo and colleagues used an innovative algorithm to more precisely calculate the volume of cavity space within Mars valleys and the amount of water that would have been needed to create those cavities through erosion over time. The majority of the valley networks are more than 3 billion years old.

“Our most conservative estimates of the global volume of the Martian valley networks and the cumulative amount of water needed to carve those valleys are at least 10 times greater than most previous estimates,” Luo said. [More at links]