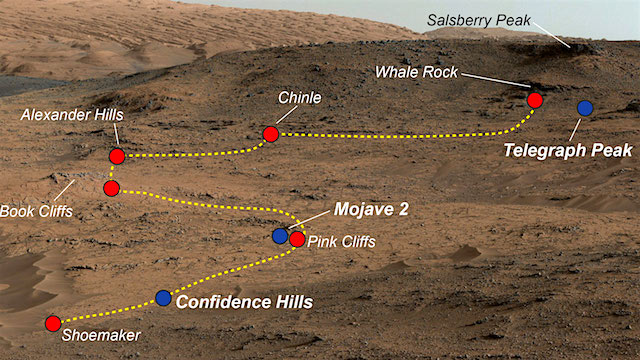 NASA scientists have found a wide diversity of minerals in the initial samples of rocks collected by the Curiosity rover in the lowermost layers of Mount Sharp on Mars, suggesting that conditions changed in the water environments on the planet over time.

Curiosity landed near Mount Sharp in Gale Crater in August 2012. It reached the base of the mountain in 2014. Layers of rocks at the base of Mount Sharp accumulated as sediment within ancient lakes around 3.5 billion years ago. Orbital infrared spectroscopy had shown that the mountain’s lowermost layers have variations in minerals that suggest changes in the area have occurred.

In a paper published recently in Earth and Planetary Science Letters, scientists in the Astromaterials Research and Exploration Science (ARES) Division at NASA’s Johnson Space Center in Houston report on the first four samples collected from the lower layers of Mount Sharp.

“We went to Gale Crater to investigate these lower layers of Mount Sharp that have these minerals that precipitated from water and suggest different environments,” said Elizabeth Rampe, the first author of the study and a NASA exploration mission scientist at Johnson. “These layers were deposited about 3.5 billion years ago, coinciding with a time on Earth when life was beginning to take hold. We think early Mars may have been similar to early Earth, and so these environments might have been habitable.” [More at links]